If its not to make honey, then what is the pollen being collected for?

It is the bees’ source of protein. In a year, a colony needs to collect and eat about 45 kilos of pollen. No single pollen delivers the full protein requirement, so bees collect pollen from many different sources.

When stored in the comb, it is possible (to someone more experienced than us) to identify the flowers from which the pollen was collected, by looking at the colour.

Back at the hive, the pollen is mixed with salivary products and small quantities of honey, and then stored in antiseptic cells adjacent to the empty brood cells that await the new generation. There it undergoes a chemical change becoming what is referred to as ‘bee bread’. This bee bread is also the principle food of adult nurse bees. Once she has ingested it, her digestive enzymes transform the nutritional supplement into a type of ‘mother’s milk’ which is then fed to the infant bee larvae. 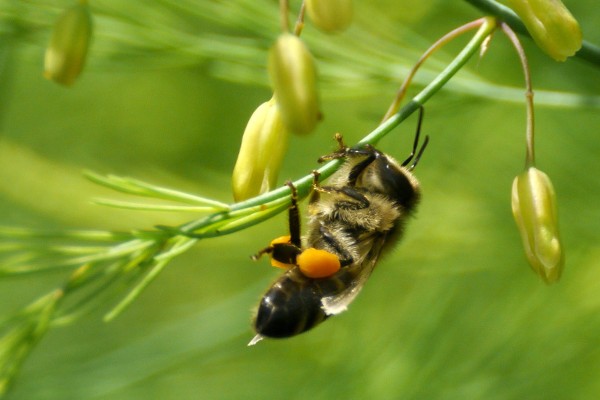 Would madam prefer nectar – the sweet, sugary fluid provided by the bramble flower? Also, the drink of the gods.

What’s on the menu this month? Forage is the term that we beekeepers use for the food sources available to bees. The reference books talk about the June Gap – a time when one mass food source has finished and another not yet begun. Its true that the oilseed rape has long since lost its bright yellow plumage and the sunflowers are nowhere near flowering. I am keen to find out what the bees are feasting on – not least so that we can perhaps plant more of their favourites for next year.

So far, I have seen plenty of activity around the lavender, honeysuckle and blackberry flowers. And then my attention was drawn to the asparagus bed. We stopped harvesting the asparagus about 4 weeks ago and it is now a mass of ferny foliage. And heavy buzzing. Its full of bees, all sporting bright orange pollen sacs on their back legs. The bees over at the bramble patch don’t have this. Time to delve into the reference books – here’s some pertinent foraging facts…

Not too far from the hive, I discovered a patch of bramble which is ALIVE with bees, bugs and butterflies. The bramble flowers are just opening, and there’s a sort of creeper there too, just blooming. The best time to go is mid morning – I think there’s plenty to go round, but I did witness a couple of altercations. 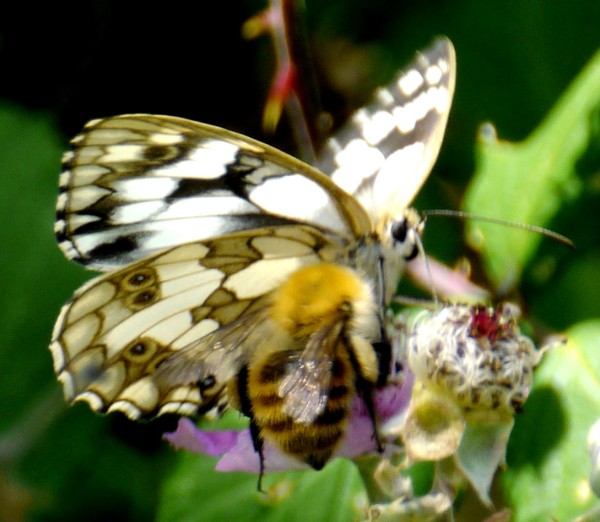 ~ a Marbled White Butterfly takes on a bee ~
the butterfly won 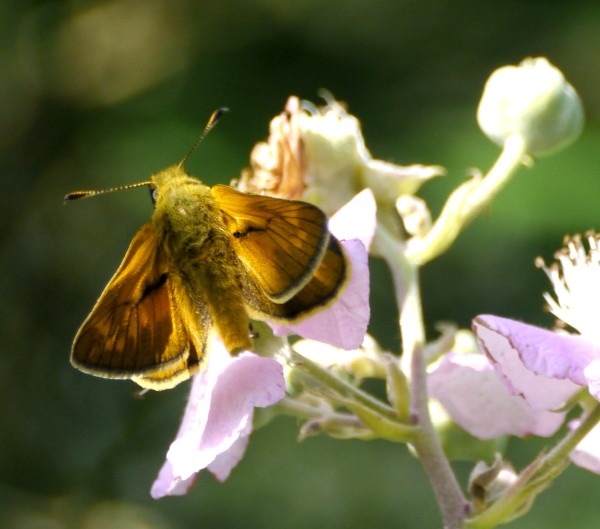 another butterfly v bee altercation
the butterfly is a Cabbage White

they’re fat, they’re round, they can’t get off the ground…

The odd thing about this myth regarding bumblebees theoretically defying the laws of physics, is that the story is so widespread and has persisted for so long.  The basic principles of bumblebee flight have been pretty well understood for many years. Somehow, though, the idea that bees ‘violate aerodynamic theory’ has become embedded in folklore.

The origins of this myth is unclear – one story tells of a dinner where a biologist asked an aerodynamics expert about insect flight. The aerodynamicist did a few calculations and found that, according to the accepted theory of the day, bumblebees didn’t generate enough lift to fly. The biologist promptly spread the story far and wide. Another version concerns a French entomologist, who applied the laws of air resistance to insects, and concluded that bumblebees clearly shouldn’t be able to get off the ground.

Returning to the first anecdote, the aerodynamicist, once he sobered up, realised that the problem was a faulty analogy between bees and conventional fixed-wing aircraft. Bees’ wings are small relative to their bodies. If an airplane were built the same way, it would never take off. But bees aren’t like airplanes, they’re like helicopters (a bit). Their wings work on the same principle as helicopter blades – to be precise  ‘reverse-pitch semirotary helicopter blades’.  A moving airfoil, whether it’s a helicopter blade or a bee wing, generates a lot more lift than a stationary one.

Another challenge with bees wasn’t figuring out the aerodynamics but the mechanics: specifically, how bees can move their wings so fast – roughly 200 beats per second, which is 10 or 20 times the firing rate of the nervous system. The trick apparently is that the bee’s wing muscles (thorax muscles, actually) don’t expand and contract so much as vibrate, like a rubber band. A nerve impulse comes along and twangs the muscle, much as you might pluck a guitar string, and it vibrates the wing up and down a few times until the next impulse comes along.

I also need to mention dynamic stall – which sounds like an oxymoron (and possibly handy to know about if you are at a dinner party with a squiffy aerodynamicist) – its the effect that occurs when the wings change their angle of attack – ie they don’t just flap up and down, they also do some interesting gyrations. The rapid change can cause a strong vortex to be shed from the leading edge (front) of the wing, and travel backwards over and above the wing. The vortex, containing high-velocity airflows, briefly increases the lift produced by the wing. As soon as it passes behind the trailing edge (back), however, the lift reduces dramatically, and the wing is in normal stall.

My observation is that they are blinking difficult to capture on film, especially in flight – constantly on the move, whizzing hither and thither – too much dynamic and not enough stall for my purposes. 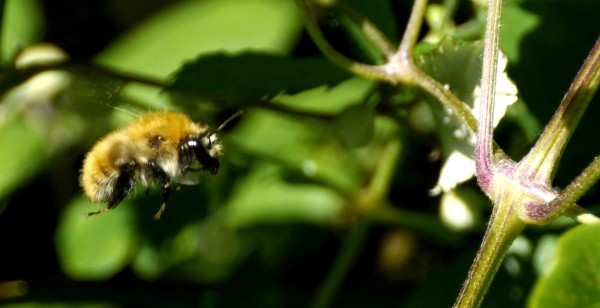 ‘there is an art, or rather a knack to flying. The knack lies in learning how to throw yourself at the ground and miss’
~ the late, great Adams Douglas Adams : Hitchhiker’s Guide to the Galaxy 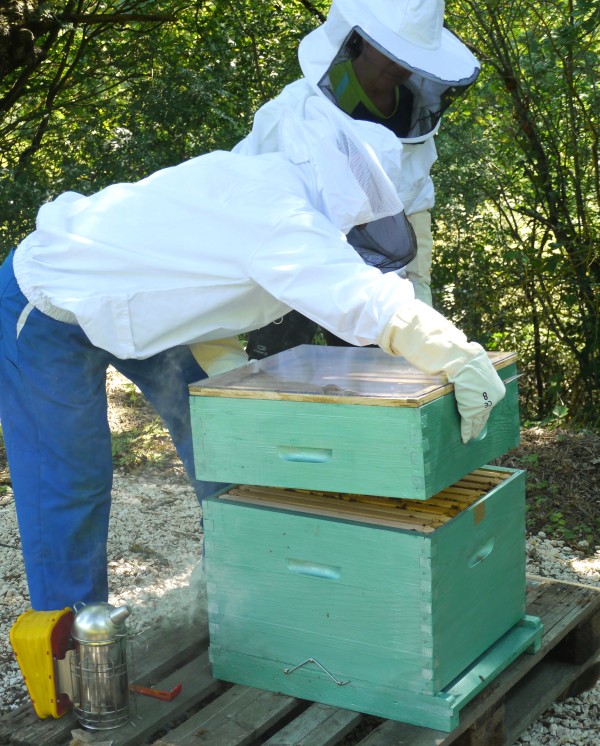 Its a sunny Sunday afternoon, and time to add the first super. Jean-Philippe has come to help, and most of the bees are off out. The first task is to get the smoker working. We have bought special pellets made from straw and lavender flowers and after some trial and error, it was discovered that the best way to get these going is with newspaper, wood shavings and pine needles – we stopped short of petrol.

there must be something about those blue French workman’s trousers

The smoke has a calming effect on the bees – it doesn’t seem to work on border collies, or indeed, wives.

All requisite bits and pieces gathered together – and its off to Bee Square.

The first job is to remove the sticky tape from the current cover – and then have a look at the frames. The bees are building their own comb – but there’s still lots of work to do on the outer frames.

Going with the advice of the Venerable Beede (and against that of the reference books), we are not going to be adding the queen excluder. This is a grill, which keeps the queen and her egg laying activity confined to the brood box, so that the super is exclusively for honey storage. VB believes that the all the bees will be happier without this restrictive barrier – and so what if a few cells of the super frames are given over to eggs.

Quick inspection over, then its on with the new super, on with Andy’s newly constructed perspex layer, and topped off with the roof. Thats another hive extended and ready for honey production. 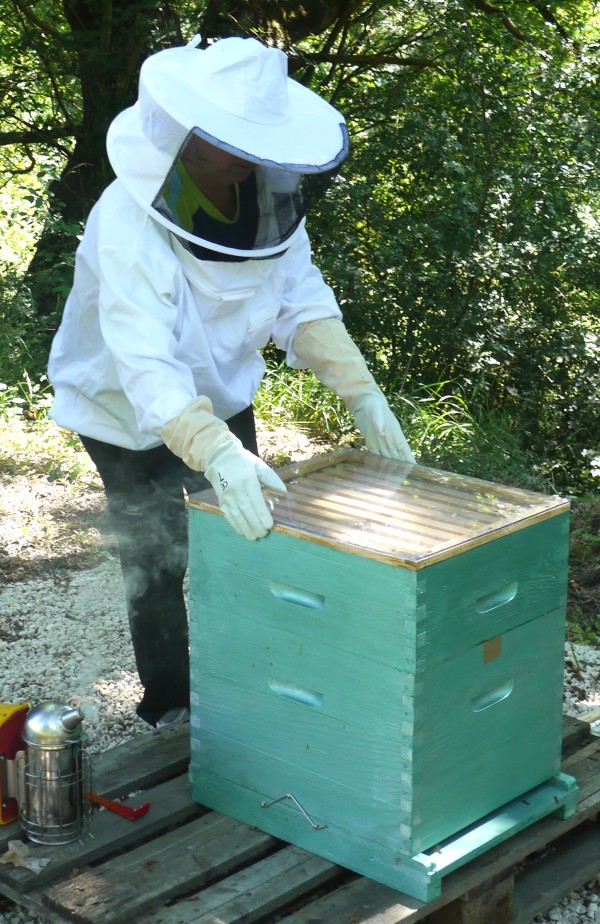 Andy getting zee kit on 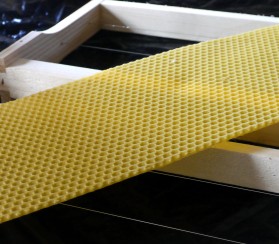 Now that the hive is up and running, and the bees are busy building away, I need to start preparing some extra room for them – a super, to sit on top of the brood box. This box and super frames are shallower than the brood box – therefore easier to handle and the honey can be collected sooner (therefore avoiding possible granulation).

The frames have been bought with a wire already threaded through it. These empty frames could be put in to the hive as they are, but we are advised to attach sheets of foundation wax – which persuades the bees to build comb where we want it.

The foundation is a sheet of beeswax, with the hexagonal cell pattern embossed on it. The bees use this to build on, and will draw out patterns into cells, thus making combs within the frames.

The foundation is laid on the wire of the frame, and the wire heated to melt the wax, fusing the 2 together. JP has an aged battery charger, which does this job admirably.

Ours, unfortunately is more recent, and it transpires that it refuses to emit a current if nothing is drawing from it. Andy therefore went into design mode, and has fettled a suitable gizmo from an old drill charger and some bits of wire.

Fusing wax onto nine frames was completed in super-fast time. I just needed to drizzle on a bit of extra wax to keep the sheet firmly in place – for which my lovely 1930’s chocolatiere comes in very useful.

art deco knick-knack being put to good use 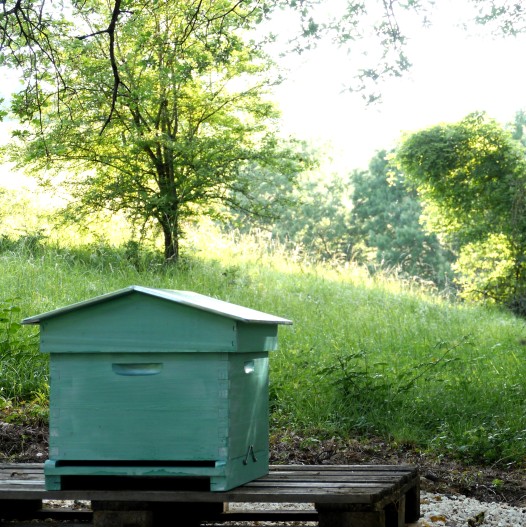 Oh, what a beeautiful morning. As we sat on the terrace with our coffee, Andy said “It dosen’t get much better than this”.

We had been over to check on our new neighbours, and it was eerily quiet. There could be several reasons for this – the bees were still fast asleep, tucked up in their beds, or they had perished over the ordeal of being moved, or they had all winged it back to the hustle & bustle of Colomiers or they were all out busily gathering pollen.

Rather hoping it was the latter, I decided to try to track them down, trusty camera in hand. This is how I got on…

wings, yellow & black stripes – but clearly not a bee
~ a hoverfly, otherwise known as flowerfly or syrphid fly ~ 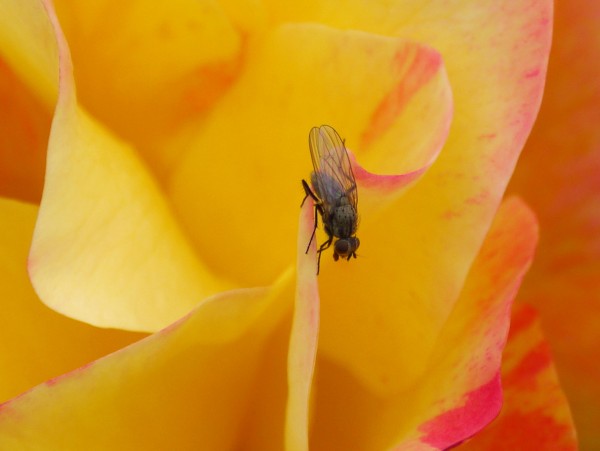 yes, its merely a fly, but what a lovely rose

excellent – a bee – but the wrong sort

yes – a honey bee – and quite recognisably one of mine 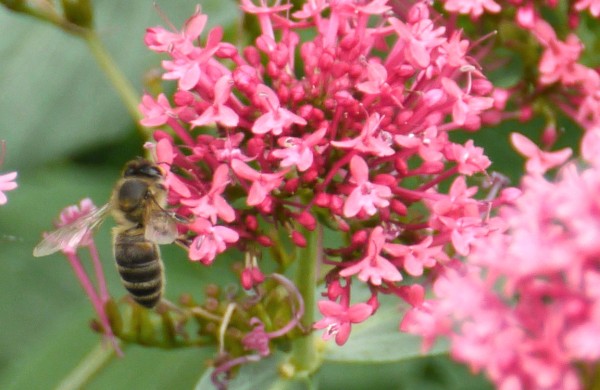 don’t think this is one of mine, but difficult to tell from beehind

Its time! The call came in to say that the hive was ready to be picked up, and brought home. So, off we all trot to Colomiers, leaving it till 10 o’clock at night, giving the bees chance to make it back home before being displaced by some 30 or so kilometers. The Venerable Bee-de led us out into his garden, where he keeps the small nursery hives (ruchette) and those hives being populated for the first time. Luckily he had kept the perspex lid on my hive – which allows a fabulous view into the inner workings, all in relative safety.

With this lid taped firmly in place, it was then carried oh so carefully to the Hilux, a sensible choice of vehicle given the barrier between the cockpit and the back.

Before leaving we were treated to a tasting of the latest honey harvest – a mix of acacia and rapeseed- yummy, and hopefully a taste of thing to come.

A short journey through the forest and we reached home – time to unpack the precious cargo, and carry it over to Bee Square.

beeing there, in Bee Square

In general the hive seemed calm and unbothered by the ordeal – there was a handful of grumpy bees at the front door, but the rest were quiet. We wisely decided to wait till every last one had gone to bed before attempting to remove the front grill… time then for a well-earned bee-r.