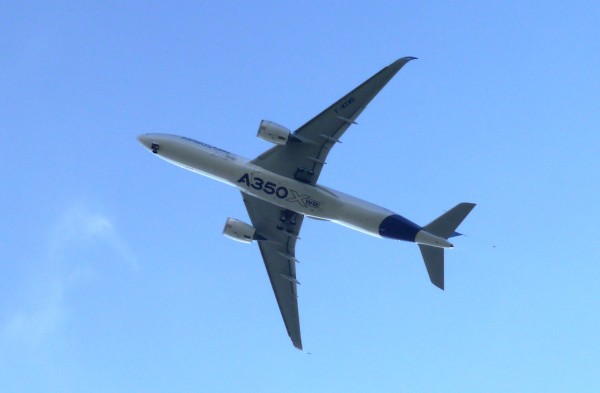 There was a big buzz of excitement all around the perimeter of Toulouse Blagnac airport this morning, as crowds gathered to witness the maiden test flight of a brand new aircraft – the A350.

Weather conditions were perfect, big blue sky with a few fluffy white clouds, and barely a breath of wind. We found a good vantage point on a small hillock, surrounded by wildflowers, right at the end of the runway. My camera lens was distracted downwards, as there was quite alot of bee activity in amongst the poppies…

But, stop it, we were here to witness the aeronautical abilities of an altogether different extra-wide bodied phenomenon.

The tension was palpable – many folk in the crowd were directly involved in some way with the design and creation of the new airliner. Just before 10 o’clock, a small corvette aeroplane took off in advance of the A350 – full of video equipment, with experts to observe the exterior of the A350 during its test flight.

And then, right on time, no fuss, the A350 started off down the runway and was soon airborne.

Airbus A350 takes to the skies

The plane is expected to fly for four hours, over France and the Atlantic, before returning early this afternoon – and then ready itself for the airshow in Paris next week.