One of the positive aspects of all the recent rain is the proliferation of wildflowers, now coating the banks at the side of the road, nestling in amongst the hedgerows and cornfields, and blanketing areas of uncultivated land. They are also appearing in and around the garden, vegetable plot and orchard (perhaps I should note that the french for ‘orchard’ is ‘verger’ – hence the title of the post).

The poppies win my Wildflower of the Week award,  photogenically colouring the roadside with their cheerful, deep red tones.

poppies swaying in the breeze

Last year, we decided to have a go at planting our own wildflower meadow, and cleared an area around an ancient pear tree. We chose a mix of flowers that would attract insects deemed beneficial to the vegetable garden, together, of course, with bee-friendly wildflower seeds. Nettles and other unappealing weeds were removed, the earth laid bare and the seeds duly scattered. And we waited. And nothing. And then the nettles and other horrid weeds came back.

But then this year, as if by magic, a colourful carpet of mixed wildflowers has sprouted up. They are a bit localised and bunched together – but quite magnificent. The marigolds are particularly vigorous – these came from seeds left over from companion planting for the tomatoes (they repel nematodes and slugs).

In a different style, but nonetheless wild, I was thrilled to find this orchid, sitting majestically alone in the middle of a patch of grass (too unkempt to call ‘lawn’), lucky to have escaped the blades of the tractor. It belongs to the Tongue Orchid family.

Credit to Amelia (https://afrenchgarden.wordpress.com/2013/05/03/of-the-well-trodden-paths/) for alerting me to these wild orchids – didn’t think I would spot one so soon after reading about them, let alone in my very own garden.

Flitting about in the garden are quite a few of these butterflies – the Heath Fritillary. In the UK, they are considered to be threatened, but not so in France – where their preferred habitat is given as pasture or unimproved hay-meadow (an apt description of the lower part of our ‘garden’). 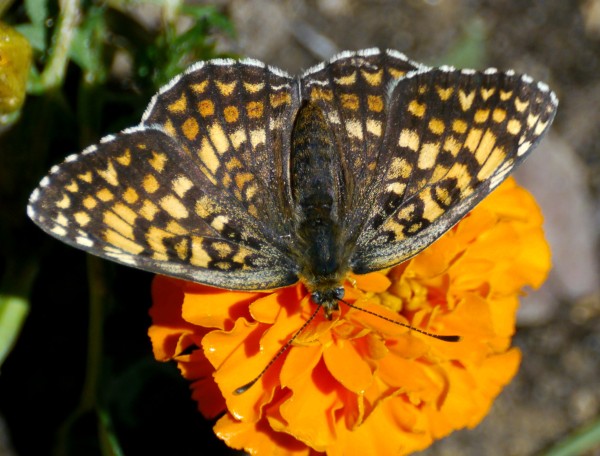 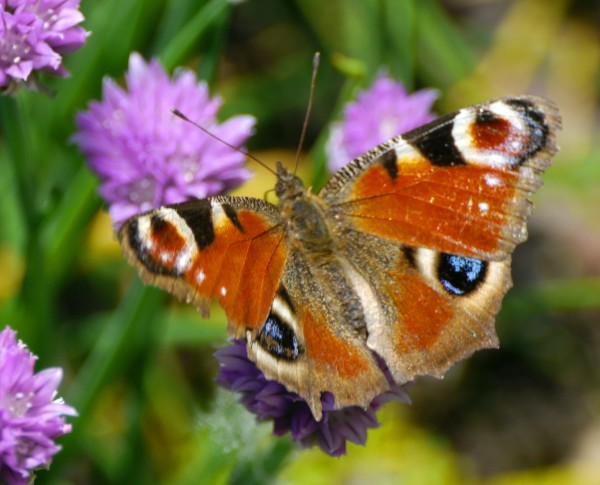 And finally, here’s a shot of something not terribly wild, my faithful hound, posing in amongst the poppies. 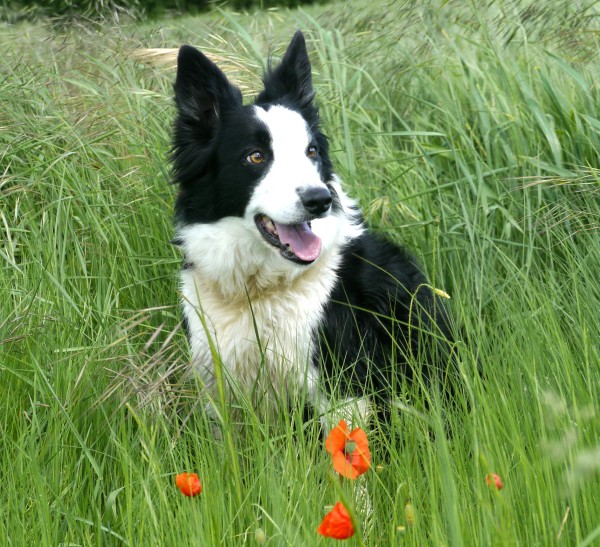 The sunflowers now are in the equivalent of their their twilight years, past their bright yellow prime, all rather brown and withered, heads bowed towards the earth – it won’t be long before we are looking at a freshly ploughed field. Time to capture some final shots, and it seems sunset is the best time.

I now realise that sunflowers point permanently in the same direction all day long – namely to the East. The buds are heliotropic (a bit like me) and at the end of the bud stage all plants are polarized to face in the one direction.

The plants remain in the fields long after the beautiful yellow petals have shrivelled and died. The sunflower however is now busy sorting out its seeds, which considering that it is a commercial crop, is actually the reason for its existence, its raison d’etre.

The seeds will go on to be used to produce sunflower oil, to be used in cooking, as a carrier oil and to produce margarine and biodiesel. The cake remaining after the seeds have been processed for oil is used as a livestock feed.

These mature flowers have droopy heads, looking at the ground, which adds to their forlorn appearance – but this reduces bird damage and losses due to certain diseases.

Its now early October and ‘our’ sunflowers are still there – but most of their compatriots have been gathered up and no doubt squashed and the oil extracted. I suspect Denys the farmer will be along soon with his noisy, ancient combine harvester to do the same. 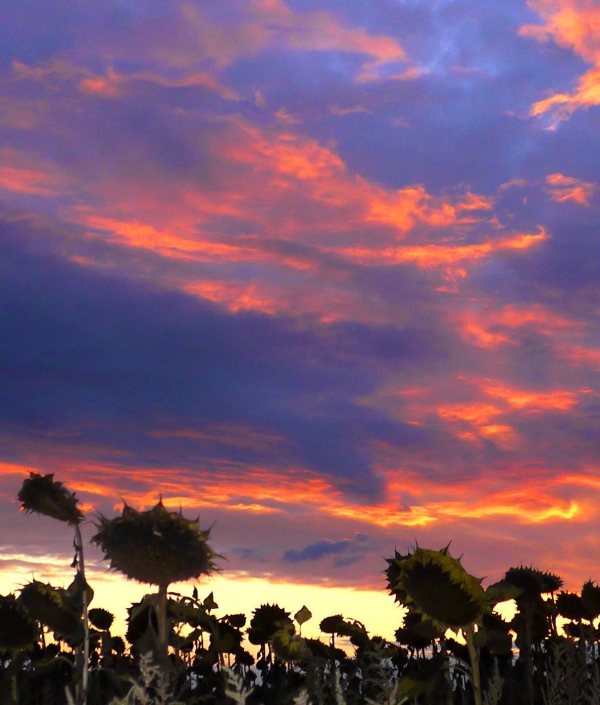 UPDATE : the farmer has just been and harvested the sunflowers…